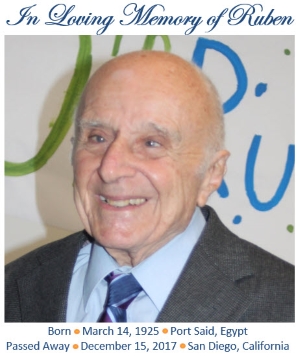 Ruben Kairy was the youngest of four children born to a Jewish family in Port Said, Egypt on March 14, 1925. One of his first jobs was working as a ship’s steward at the Suez Canal. When the war of 1948 broke out in Israel, things became difficult for him in Egypt, so he moved to Europe where he lived for several years before settling with family in Lima, Peru.

In 1962, he married Colleen O’Gara and they had two children, Jacques and Suzanne. He was active in table tennis both as a player and later, an international umpire. He eventually refereed games at the World Championship level and even the Olympic Games.

Following a brutal assault in 1989, he moved to San Diego to be close to his children. He began taking interpreting courses at the San Diego Courthouse. In 1993, at 68, the age where most would think about retiring, he began working at Federal Defenders, where he remained for the next 23 years.

Carmen Alicia joined FDSDI in July of 2006 where she was an outstanding interpreter and translator and the “go-to” person not only for south of the border terminology and knowledge, but also for any type of advice, as she was extremely wise. She was also a great co-worker and friend who was always willing to help. She inspired everybody at FDSDI with her strength and positive outlook in the face of her illness, which eventually ended her life in October 2015. 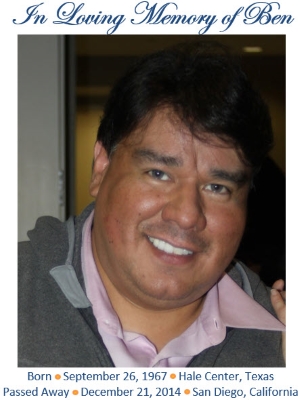 Ben Solis, III was born in Hale Center, Texas in September of 1967. At the young age of 22 years old, being the adventurous soul that he was, Ben made his way to beautiful San Diego where he quickly realized that this was his real home. Everybody knew Ben or would get to know him within minutes as he easily made friends quickly because he always made a grand entrance wherever he went.

Ben had a successful career spanning 24 years with the Federal Defenders of San Diego, Inc. (FDSDI) starting in 1990. He eventually became one of their top Computer Litigation Specialists, a position that would bring him much notoriety in his profession among his peers nationwide. He also spent a stint with the Federal Public Defender for the Southern District of Texas in McAllen, Texas starting in 2003 because he thought going back home would be a good idea. Although he made many close friends there and enjoyed himself immensely (of course, where didn’t he?), his heart was always in San Diego so when he got a chance to return to FDSDI in 2006 he took it. 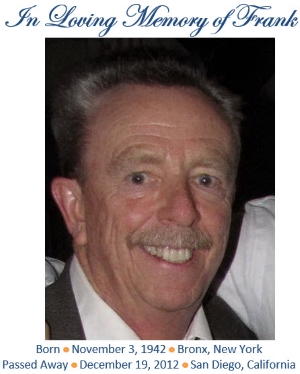 Frank Mangan was born in the Bronx, N.Y. on November 3, 1942. He joined the Marist Brothers after High School, but decided the monastic life was not for him and went back to college.

Frank went to work for San Diego’s Federal Defender in 1973 as a trial attorney. In 1976, he left Federal Defenders to manage the San Jose branch office of the Federal Public Defender of the Northern District of California. Frank later opened his own criminal defense practice in 1978, where he defended many high profile clients in both federal and state courts, including famous phone hacker, Captain Crunch, Hell’s Angels’ Sonny Barger and tax attorney to the rich, Harry Margolis.

Frank returned to Federal Defenders in San Diego in 1995 as a Senior Trial Attorney. Frank led the office’s “New Attorney Training Committee”, teaching young attorneys how to become superior litigators with a profound knowledge of federal criminal law and ensuring that each generation of Federal Defender attorneys provide quality representation to their clients.

Frank served the office as Chief Trial Attorney from 2002-05. He was the Acting Executive Director from January 2004 to May 2005. Later he assumed the position of Senior Litigator/Special Assistant to the Executive Director. He remained actively involved in supervising and training the Federal Defender younger trial attorneys until the very end. He will be dearly missed by several generations of criminal defense attorneys; all lucky enough to have called Frank their mentor. 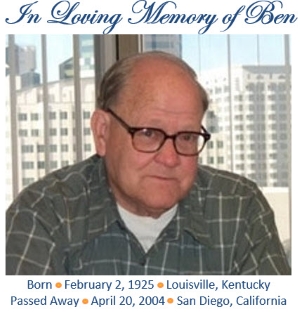 One of John Cleary’s greatest legacies and gifts to FDSDI was introducing the federal defender family to Benjamin Franklin Rayborn. More knowledgeable about the law than many lawyers, Ben worked at FDSDI for over thirty years. As the chief research assistant, he participated in writing thousands of briefs. His legal education was the product of his own experiences in prison.

Ben was an unlikely hero. J. Edgar Hoover once dubbed him “the worst gangster to come out of World War II.” Indeed, by age twenty-one, Ben led a gang of armed bank robbers who called themselves the Bennie-Denny gang. In 1946, still only twenty-one years old, he was convicted of bank robbery and received a life-sentence from the state of Kentucky. The next year, the federal government increased that sentence when it prosecuted him for federal firearms offenses and sentenced him to thirty years.

Ben began serving his sentence in the custody of the Kentucky state prison authorities. It was in prison were Ben learned how unjust the “justice” system could be. The prison had no plumbing facilities, the food was inedible, and the prison guards were allowed to beat the prisoners. In fact, the prisoners were not even allowed to have law books. In 1952, Ben led a prison riot to protest these conditions and was quickly classified as being “incorrigible.” Kentucky became so concerned about Ben’s influence, that it transferred Ben out of its custody and into federal custody.

Ben arrived at Alcatraz in 1952. A model prisoner, Ben began working in the prison library and eventually became a prison administrator. It was at Alcatraz that Ben’s legal training began. Self-taught, Ben became the consummate “prison lawyer.” He helped inmates write motions, petitions and writs, successfully helping hundreds of prisoners to get different types of post-conviction relief. Eventually, Ben was able to reduce his own federal sentence from thirty to twenty years and successfully argue that Kentucky had relinquished jurisdiction over him such that it could not force him to complete his state sentence.

After Ben’s release from custody, he was re-arrested and convicted in Tennessee for bank robbery. Again, Ben was able to reduce his own sentence from eighteen to ten years and again he helped hundreds of prisoners get post-conviction relief. Ben began teaching his fellow inmates Constitutional law and also taught inmates how to pass the high school equivalency exam. His work helping inmates brought him into contact with John Cleary who was so impressed with his work that he offered Ben work at the Legal Assistance to Inmates Program at Emory University. Eventually, Ben was released into John Cleary’s custody. When John Cleary moved to San Diego to head the newly-formed Federal Defender office, he convinced Ben to join him in fighting for indigent clients.

At Federal Defenders, Ben worked as Chief Legal Research Associate from 1971 until he retired in 2004. He wrote hundreds of briefs for appeals in the Ninth Circuit, as well as in the Supreme Court. He helped train, guide and inspire the attorneys that worked at Federal Defenders. Ben was indispensable in shaping Federal Defenders and in cementing its national reputation. Unfortunately, a week after he retired from FDSDI, Ben passed away. He will always be remembered for his generosity and his spirit.